Posted on June 25, 2015 by Admin under Derbyshire, The Life of a Derbyshire Photographer
Leave a comment 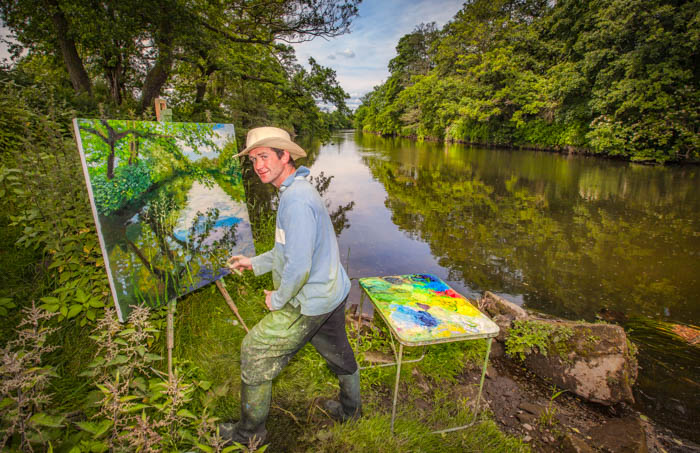 For my forthcoming photo book ofÂ the Derwent Valley Mills World Heritage Site, I decided to captureÂ a hardy species which, if you’re lucky, you may find in the wild, namelyÂ pictor expositus aeris: the open air painter, armed with brush, easel and canvas.

So far, I have photographed a few of Derbyshire’s finest landscape artists actually painting en plein air, including father and son Rex and Mark Preston and Andrew Macara.

My latest capture was Duffield artist Colin Halliday, painting by the Derwent near Peckwash Mill towards Little Eaton.

As Colin favours big canvases and uses a camping table as a makeshift palette, it makes for a veryÂ photogenicÂ image and although I had to squeeze behind him by the lapping water, my wide angle lens opened up the scene so that you could see what he was painting.

There’s something I love about Colin’s work… As I stood a few feet from hisÂ painting – which is almost finished – I couldÂ see the detail. Â However, get close up, and you lose yourself in a different painting: a beautiful, colourful abstraction of thick brush strokes.

I suddenly wondered how Colin would transportÂ his painting to and from the river. Â It would be still wet, of course – in fact, when finished, he says it can take up to six weeks to dry – so Colin has no other option but to walk with the canvas on his head, the artwork pointing to the sky. Â I didn’t dare tempt fate by asking him what we would do if suddenly the heavens opened. Â What’s more, Colin has to then go back to his painting spot to carry away his camping table, oils, flask etc. 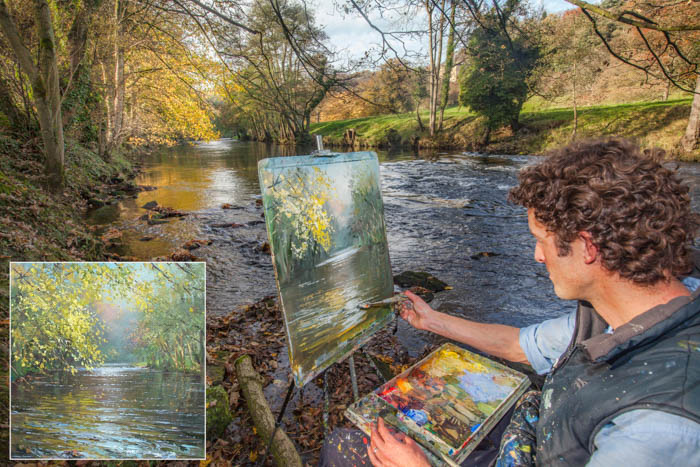 Mark Preston – seen hereÂ also by the river (at Cromford), says that sometimes theÂ rain has actually helped his paintings by mixing in with the paint and ‘creating a more mysterious and abstract effect.’

Mark has just sent meÂ a photo ofÂ the completed painting and, at the moment, includingÂ the finished work in my photo as an inset is the way I want to present the final photo image in the book – and the same will go for the image of Colin. 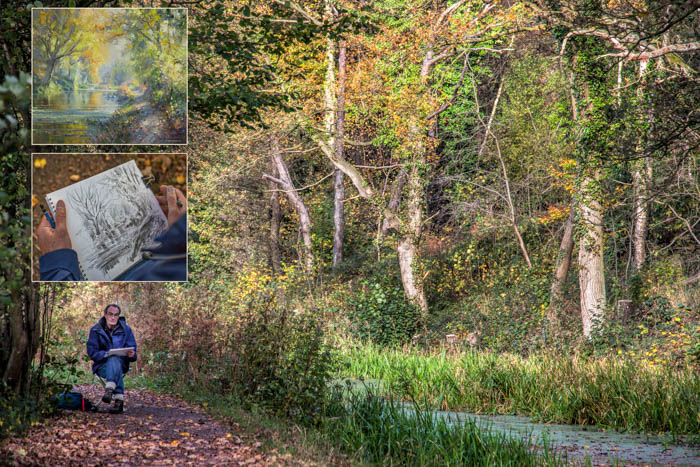 For the image of Rex Preston, I felt I had to include both his sketch and finished painting because Rex – pictured sitting on the towpath at Cromford Canal – tends to sketch in situ and do the painting back in his studio. Â His sketches appear quite, well… ‘sketchy’ and basic but he obviously retains a clear memory of the scene as the finished paintings always look evocative and true. 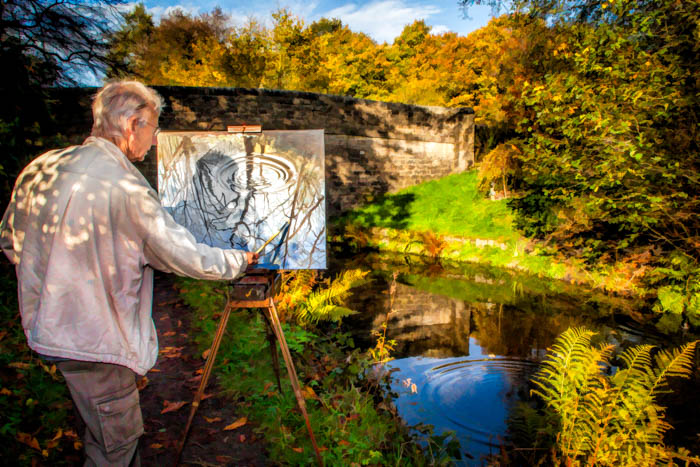 The other photos show Andrew Macara, also by the Cromford Canal, and Jen Aitken beside the Derwent at Cromford. Â Look closely at both those images and you will see painterly splodges of colour. Â This is becauseÂ I took both images into a piece of software called Topaz Simplify where one effect – with the click of the mouse – turns the photo image into an oil painting. Â The full effect is always too ‘splodgy’ so I have to adjust various sliders to retain more of the integrity of the photograph but I thought it would look effective on images of artists with their work. Â DOES it work? Â I’m not sure yet! 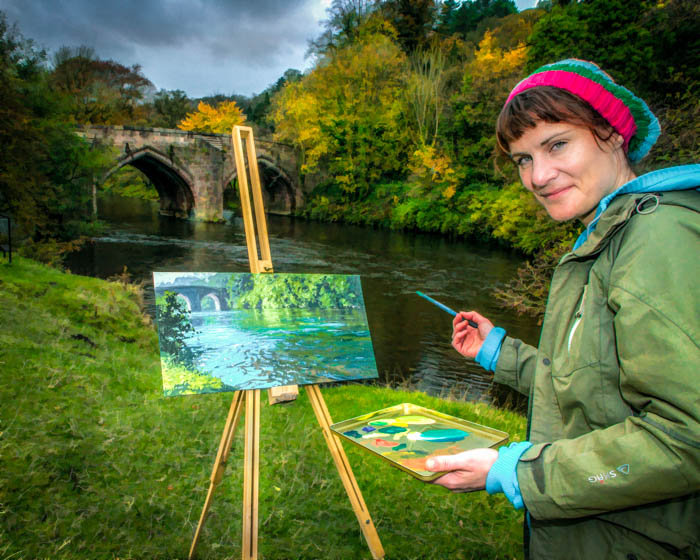