Posted on April 16, 2014 by Admin under Uncategorized 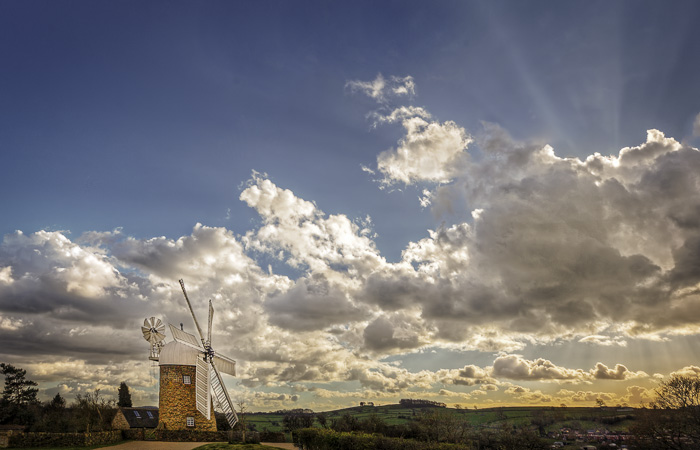 Heage – a village close to Belper – means ‘high, lofty and sublime’ which is an apt description of its main feature: a working six-sailed stone windmill, the only one in Britain and, possibly, the world. Â Restored in 2002, it looks as good as it did when built in 1797. Â  The windmill has its official opening this Saturday – April 19 – and I’ll be there… I’m a Trustee.

As a chief writer and photographer for Derbyshire Life magazine, it was my pleasure to feature the village of Heage in 2009.Â  It was an even greater pleasure to then be invited to become a Trustee of the windmill.Â  My glowing write-up about the windmill had clearly been noticed!Â  But who wouldn’t love this windmill?Â  Â There is something about the shape, lines, singularity and sheer nobility of a windmill that makes it one of the most prepossessing sights on earth.

As someone with media experience – I spent 22 years at Radio Derby – I have also been able to help promote the windmill. Â I have done my own bit of restoration: on the website, which I also manage.Â  Publicising the mill comes easy…Â  one can’t fail to be fascinated by all those cogs, levers, pulleys, weights and trapdoors which enable the mill to produce its own flour.Â  I feel privileged to be a part of one of the finest visitor attractions in the East Midlands.

It’s also – as my recent photo shows – one of the most photogenic attractions anywhere in this world. Â Come visit – it’s open every weekend plus Bank Holidays – from April to the end of October.